Ever since the imprisonment of journalist Roxana Saberi in Iran, I have started each day by checking the headlines, anxiously awaiting news of her release. Her imprisonment has made one fact very clear for me: I will not be going to Iran anytime soon. 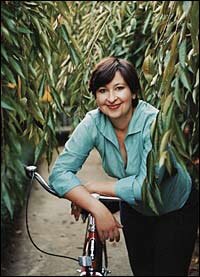 Firoozeh Dumas was born in Abadan, Iran, and moved to Whittier, Calif., when she was 7. She is the author of Funny in Farsi and Laughing Without an Accent.

It is perhaps difficult for the average American to understand the horror of living in a society without freedom of speech. Free speech is not just about gangsta rap and the right to rhapsodize about killing cops. Freedom of speech is as simple as the right to have a bumper sticker on your car — a bumper sticker that tells everyone behind you that you don’t like the president. You won’t find that on my car, but there is one SUV driver in my neighborhood who really, really dislikes President Obama. If he lived in Iran and displayed the equivalent opinion of the Iranian president on his bumper, he would be in Evin prison.

Many people in this country like to end their day by watching The Daily Show. Well, next time you’re laughing at one of Jon Stewart’s monologues, you might just give thanks for the First Amendment. In Iran, he would have been silenced a long time ago. Same for Rush Limbaugh. He annoys me, but I’d rather hear his opinions than know that he cannot express them, even though, for the record, I disagree with everything he says. But we can agree to disagree — oh, that is the sweetest statement.

In a society without freedom of speech, conspiracy theories run amok and suspicion casts a shadow on everyone. As an Iranian-American humorist, I consider myself a Middle Eastern Erma Bombeck. My books are popular in Iran and in the United States, proving that humor about families and growing up is universal.

My books are G-rated and mild, not at all controversial by this country’s standards. Unfortunately, an Iranian clergy decided to criticize me for criticizing the taking of the American hostages in Tehran in 1979. Of course I’m against taking hostages, anytime, anywhere. Who isn’t? For that simple criticism, I found articles about me on the Internet, accusing me of working for the American government. Because I regularly defend the Iranian people, who have no voice, I have been accused of working for the Iranian government. And because I have written that I was against the Islamic Revolution, I have been accused of being a monarchist. I can’t even get my kids to make their beds. Can’t a person be against the shah, against the current government of Iran and just leave it at that? Not in a country where you are not allowed to have a differing opinion from the government.

So why is it that I think most Americans do not appreciate freedom of speech? How can you when you’ve always had it? It’s like gravity. No one ever says, “Thank God for gravity!” And yet if we somehow lost it for a week, gratitude for gravity would be the rage.

But how can we instill appreciation of the First Amendment in this society? I don’t know if that is possible in the abstract. Can we imagine a day without differing opinions expressed anywhere — on TV, in newspapers, on radio or in blogs? The Iranian-Canadian Hossein Derakhshan, better known as the Blogfather — the person responsible for spawning Iran’s spectacular blogging revolution — sits in a prison in Iran. He, like Roxana, loves Iran and tried to use information as a way to build cultural bridges. Sorry, but without the First Amendment, bridge-makers are seen only as suspects.

So while Roxana Saberi and Hossein Derakhshan languish in prisons, I continue to pray for their release and for their families, too, who are experiencing a different kind of hell. In the meantime, my dear fellow Americans, please take a moment to thank the founding fathers for their foresight and wisdom. I hope that someday we can have the equivalent of the First Amendment in Iran; and I hope that someday we can have bumper stickers in Iran expressing all kinds of outrage. In the meantime, I wait.

Firoozeh Dumas was born in Abadan, Iran, and moved to Whittier, Calif., when she was 7. She is the author of Funny in Farsi and Laughing Without an Accent.